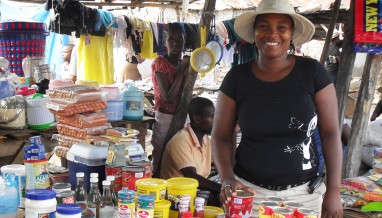 “I am proud to be a FINCA client, and I love what FINCA has done for me and for other Haitian women. FINCA has helped me make a much better life for my family, and give my children a chance for a better future. Thank you FINCA!”

Recently hit by Hurricane Matthew, the poorest country in the Western Hemisphere is still suffering the effects of the devastating earthquake of January 2010, which killed as many as 316,000 people.

Daily life for a Haitian is extremely challenging. 80 percent live in poverty, and nearly 60 percent, in abject poverty. Only 37 percent of the country has access to electricity and 24 percent have access to sanitation facilities. Remittances—money sent to Haiti by citizens working abroad—account for around 25 percent of the country’s economy. In 2012, remittances accounted for more than five times the earnings from exports.

Launched in 1989, FINCA Haiti is one of the oldest subsidiaries in the FINCA network. In the face of national unemployment rates around 40 percent, FINCA Haiti supports small and startup microenterprises, enabling Haitians to create their own jobs. FINCA Haiti provides Village Banking, individual, agricultural and local currency loans as well as money transfers services to clients in both rural and peri-urban areas of the country.