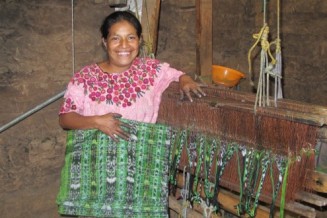 Catarina is proud to report that, as a result of taking out her Village Bank loan, she and her husband have increased their production two-fold, making it possible for them to continue to work to expand their weaving business.

Guatemala is the most populous country in Latin America and also one of the poorest. More than half of the population lives below the poverty line, and 13 percent live in extreme poverty. The country has one of the highest malnutrition rates in the world; over 60 percent children are chronically malnourished.