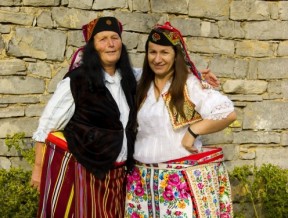 Sabrije joined FINCA Kosovo Temaj Village Banking group to help expand her embroidery business. Since then her business is growing steadily and becoming more profitable. She plans to continue her relationship with FINCA to help create a better future for her children.

With a multi-ethnic population and a long history of conflict, Kosovo is the poorest country in Europe. High unemployment has forced many Kosovars to migrate, while others have tried to create their own jobs in the informal economy. The World Bank estimates that unemployment among youths—15 to 24 years—exceeds 57 percent in Kosovo.

With a largely Muslim, male-dominated and clan-based society, women have fewer economic and employment opportunities in Kosovo. FINCA Kosovo is the only microfinance institution in the country that offers business start-up loans to both women and men. It offers an array of credit products, including individual, small group, agriculture and local currency loans.