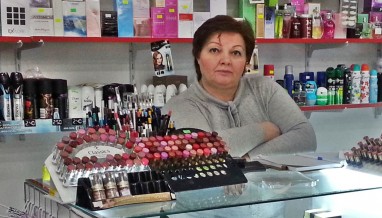 By focusing on her goal, Nazakat achieved it. Even though she always knew she needed to rely on her own skills and hard work, she says she’ll never forget the close working relationship she has with FINCA, and the support they’ve provided on her road to success.

Azerbaijan has significant oil and gas reserves, but to ensure the welfare of all its citizens, the country needs a more diversified economy. More than one-third of citizens are employed in agriculture, yet the sector accounts for less than 6% of the economy. Over half of the poor population in Azerbaijan live in rural areas facing deficient infrastructure and unreliable drinking water, gas and electricity supply. Only 80% of Azerbaijanis have access to drinkable water.

Since 1998, FINCA Azerbaijan has been helping more than 77,000 Azerbaijanis improve their lives. The subsidiary’s rapid growth is a testament to the country’s tremendous demand for microfinance. It offers individual, small group, agriculture and SME loans throughout 35 urban and rural locations in the country. FINCA Azerbaijan is the largest non-bank credit organization in Azerbaijan and was the first microfinance institution to receive a license from the country’s National Bank.