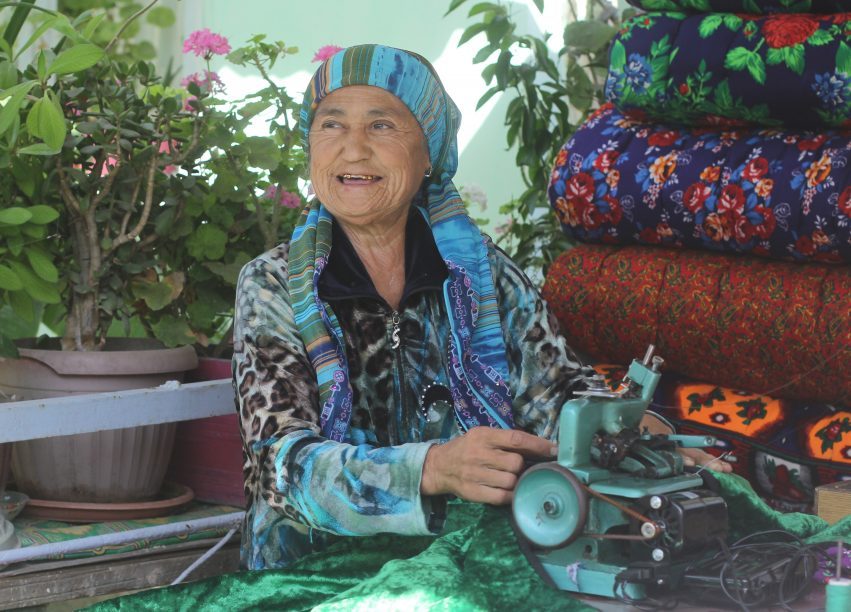 Mountainous and sparsely populated Kyrgyzstan was one of the poorest countries in the former Soviet Union and today it is the second poorest country in Central Asia, with a per capita income of just $2,400.

Some Kyrgyz—like 65-year old Makhpuza Talibaeva —have suffered more than others, though it is impossible to tell that today from her cheerful demeanor.

Her family’s sole breadwinner, Makhpuza  practiced medicine for nearly 20 years, enjoying a successful career as a physician during the Soviet days. Though her son was born with a severe disability, he received good state-sponsored care back then.

With the fall of communism, however, government support of the healthcare system was slashed. Doctors like Makhpuza saw their incomes plummet. The costs of treating her son soon consumed nearly all her meagre earnings. Makhpuza had to give up medicine. She took up sewing, one of her other passions, and started selling the beautiful quilts and clothing she created.

In 1998, to help her buy more rolls of fabric and expand the business, Makhpuza took out a small loan from FINCA. She has been a loyal client ever since, and today has a loan of US$340. Her business has grown steadily and Makhpuza has supported her entire family, including her son’s treatment. As a result, he has been able to marry and now has two children.

Makhpuza says that, thanks to FINCA, she is “not alone in this big world and I have a big support, which changed my life and made it more positive. The impossible is possible.” As hard as things got for her,

FINCA gave me the power to struggle and to keep moving forward.

To honor the women who have used their FINCA microloans to develop their own businesses, we organized a competition to let supporters vote for the story that they find most inspiring. Among four extraordinary women, Makhpuza from Kyrgyzstan received the most votes.