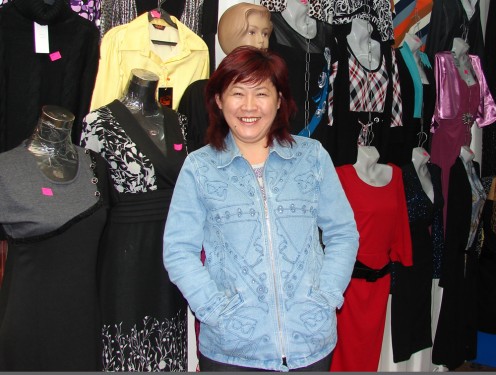 Like millions of citizens of Kyrgyzstan and other former Soviet republics, Tamara Shekimbaeva was impacted by the collapse of the Communist system; she worked as a weaver in an old carpet factory until it closed and all of its workers were laid off. The 1990s were a particularly desperate period for many people in Kyrgyzstan, as jobs became increasingly scarce. To make matters worse, her husband—realizing he would have to support the family on his own—abandoned Tamara and later divorced her.

Forced overnight to find a way to support herself and her 17-year old daughter, Tamara used what savings she had to rent a small shop in her hometown of Karabalta, where she sold detergent, plastic dishes and other household items. At first, she struggled to make enough income in the still unfamiliar world of the free market, but she was determined to provide her daughter with a good education. In 2000, she heard about FINCA, which had launched its program in Kyrgyzstan in 1995, and its commitment to providing financial services to women like her, who were working hard to build small businesses to improve their families’ living standards.

Tamara joined FINCA’s “Marta” solidarity group in Karabalta and used her first loan of $125 to expand her inventory of household items, providing more choices of products to her customers and higher profit margins for her shop. After several years of growing her business—and her daughter’s graduation from Bishkek University—Tamara organized her own solidarity group and was elected chairwoman. Her loan sizes grew along with her business. She used her larger loans to finance the purchase of a small shop in the Karabalta market and began to sell women’s clothing, a much more profitable line of business. Her most recent loan of $1,500 has been invested in purchasing a wide range of clothing and accessories for her new shop.

Tamara says, “I have a lot of customers at my shop who are in a difficult situation. I try to help them as I can; I counsel them about FINCA loans, and help them create their own FINCA solidarity groups. Many of them have received FINCA loans on my recommendation and have been able to start a new life as a result. I would not have this success without FINCA.”