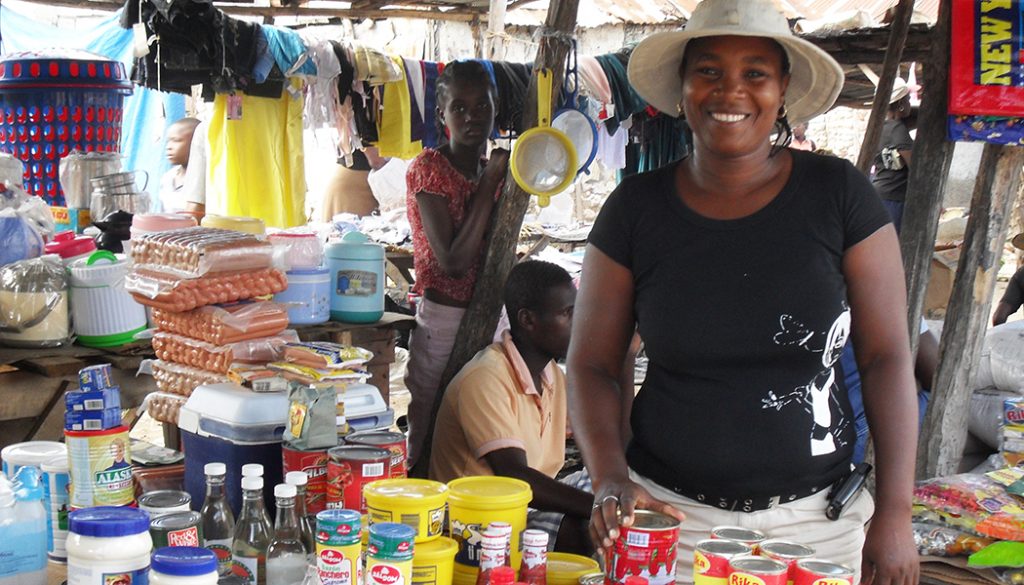 Margarette first became a FINCA Haiti client in 2006, because she wanted to give her three children a better life. Her big dream was for her children to go to school so they could have a better future. Back then, Margarette supported her children with a small business from her house in Aquin, selling meat as well as some hardware items. But this business never made her much money, and she wanted to earn more to pay for school fees. When Margarette heard about FINCA in a meeting at her church, she knew it could be her chance. She got together with some neighbors, and they formed the Fanm Aksyon (Women of Action) FINCA Village Banking group.

Margarette used her first FINCA loan of 4,000 gourdes ($105) to buy cosmetics in Port-au-Prince to sell in Aquin. She was very successful, so FINCA increased her second loan amount to 8,000 gourdes ($210), which she used to buy cosmetics in bulk from a wholesaler. This allowed her to get better prices, keep an inventory, and offer a wider selection of products. As a result, her profits grew every month.

As her business continued growing, FINCA suggested that Margarette move up to a FINCA small group loan. Her friends in Fanm Aksyon wanted her to stay, but they were happy to welcome her daughter Rachelle in her place. Rachelle stayed with the group for two years, and became the treasurer. She has since left to go to school in Port-au-Prince. Though her family is no longer part of the group, it still meets at Margarette’s home in Aquin, and she serves as its mentor. The members call her “Mother Mountain.”

Margarette says the first time she borrowed from FINCA, she was afraid that she would never be able to repay so much money. But she did, and over the years, she was able to borrow more. Her confidence grew as she found that she was able to pay back every loan. She is using her most recent loan of 120,000 gourdes ($3,150), with a nine month repayment period, to continue expanding her cosmetics and hardware businesses, to buy equipment for a new butcher shop, and to pay for a motorcycle and driver’s salary—another new business.

Thanks to her hard work and her FINCA loans, Margarette has been very successful. She bought a small house in Port-au-Prince for her children, so they can go to a better high school than the one in Aquin. She visits them whenever she has to buy merchandise in Port-au-Prince. Rachelle is now in eleventh grade; her son Enoch is in tenth, and her daughter Ruth is in ninth grade. She used some of her earnings to buy a plot of land in Aquin and two cows. She is even saving to pay for Rachelle’s wedding.

Margarette and her children all survived the 2010 earthquake, but their house in Port-au-Prince was destroyed, as was her father’s house in l’Asile. Her dream is to build another house for the children, so they can finish high school and go on to university.

Margarette says, “I am proud to be a FINCA client, and I love what FINCA has done for me and for other Haitian women.

FINCA has helped me make a much better life for my family, and give my children a chance for a better future. Thank you FINCA!