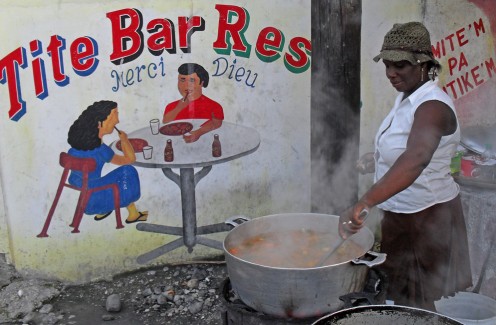 In Haiti, the Western Hemisphere’s poorest country, Chriselia Archill is raising four children, while also supporting her mother and four of her siblings, on earnings from her successful restaurant. The extended family lives in the seaport town of Les Cayes, about 140 miles southwest of Haiti’s capital Port-au-Prince.

In 1999, Chriselia was working as a street vendor, selling stews for 10 Gourdes (about US25¢) per plate, from pots she carried on top of her head. One day, a friend invited Chriselia to join her FINCA Haiti Village Banking group through which she could take out a loan to purchase food in bulk at lower prices and, thereby, increase her profits on each plate sold. Chriselia’s first Village Banking loan was for 800 Gourdes, the equivalent of US$20. Soon she was able to set up a business at a market stall, where she gained a steady clientele for her delicious stews.

In 2008, after nine years of hard work, regularly expanding her business while repaying her growing loans, Chriselia increased her loan amount to 40,000 Gourdes (US$1,000), and used the proceeds to hire five neighbors and open her own restaurant in Les Cayes.

While 1999 seems distant, in time, for most people, for Chriselia, it was the most memorable and fruitful year of her life, because it was the year she began her life-changing relationship with FINCA. Her restaurant has become very successful and Chriselia says:

FINCA Haiti is my father and my rock!

She is proud that she can provide a better life for her children with her earnings, and can care for her aging mother and support four of her siblings. Chriselia’s long-term goal, with the support of FINCA Haiti’s loans, is to purchase the building that houses her restaurant so she can continue expanding her business.