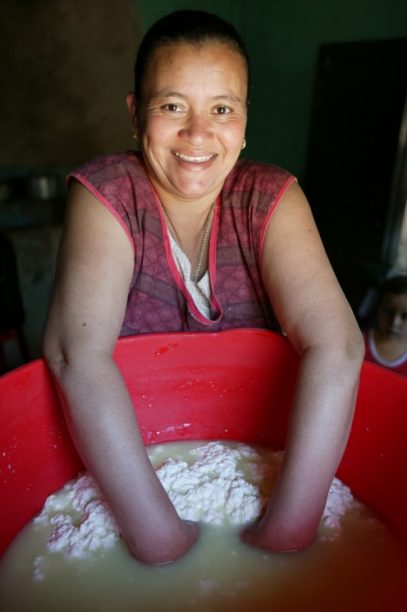 Ana Osorio and her husband have eight children ranging in age from 24 to five. Ana made cheese, which she sold from home, to supplement her husband’s income from milling grains. But she could only buy milk and other raw materials in small quantities, so she cleared just 30-40 lempira ($1.59 – $2.12) in profit per day. The family could not afford meat. While Anna could send her children to school, she could not afford all their books and supplies.

Ana knew she could increase her earnings if she could boost production. She joined the village banking group “Sabana Grande” and used her first loan of 2,000 lempira ($105) to buy greater quantities of milk at better prices. With subsequent loans of up to $210, Ana has nearly quadrupled her profits.

Ana’s family now eats a more balanced diet, including meat several times a week. Ana’s younger children have all the books and supplies they need and she is helping her older children pay for trade schools. Two daughters help her with the cheese business so they have the freedom of their own spending money.