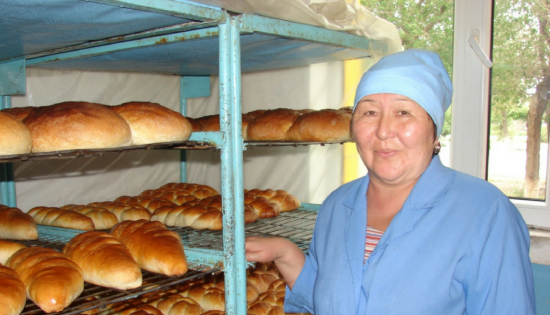 Data from a recent survey of FINCA clients in Kyrgyzstan shows that women-run businesses are generating higher profit margins than their male counterparts. They also create more jobs with FINCA’s loans, which enables them to hire more women and to achieve their business goals.

Closing the Gender Gap and Opening the Doors to Financial Inclusion

Financial inclusion in Kyrgyzstan is growing fast—much faster, in fact, than most places where FINCA works. Only 18 percent of adults had a bank account in 2014, but—according to the latest Global Findex—that number has more than doubled in the last three years. Kyrgyzstan is also one of the few places where the gender gap in financial services is quite small, just about one percent.

FINCA is doing its part to make sure women don’t fall behind. Over 55 percent of our borrowers in Kyrgyzstan are female and most of them live in rural areas. Some fresh data from a client survey shows that, despite some long-standing challenges, women are running their businesses very prudently—and generating the best social returns.

Women are still mostly concentrated in the trading sector, where their annual sales are about $1,000 less than men, and their profits are about 32 percent lower in value. In fact, women’s nominal sales and profits are lower than men’s in every sector, except services.

But there are some good results when we look at profit margins—the ratio of profits to total sales. On the margins, women who venture beyond their traditional trading activities are running more profitable businesses, sometimes by quite a lot. In small scale manufacturing, such as textile and food production (grouped together as production in the graph below), a woman’s business has a 42 percent profit margin, compared to 27 percent for men. And this difference can be seen across the board.

Trade—women’s traditional business activity—is the one sector where men do (much) better, because they purchase in greater volumes and are less prone to seasonal variation. But in every other sector, women are generating bigger margins, albeit at smaller scale.

A healthy profit margin shows good business management and translates into less risk for FINCA: as long as the loan is not too high, the payments will fit easily into a borrower’s cash flow. FINCA Kyrgyzstan has already gained Smart Certification, meaning it upholds the highest client protection standards in the industry, such as working to prevent client over-indebtedness. If anything, FINCA Kyrgyzstan is giving clients smaller loans than they are requesting. While women were less likely than men to complain about their loan sizes, they still say they could use 25 percent more than they were granted.  Men, by comparison, want a loan about 240 percent higher. Looking at profit margins, women might be asking for the right amounts. Men, not so much (unless they run a manufacturing business). Also, women stick with FINCA longer, having been with FINCA for an average of six loan cycles, compared to four for men.

What about the impact of FINCA’s loan?  Here we found that women not only generate higher margins with smaller loans, they are also generating the strongest social return on FINCA’s investment.

According to our survey, FINCA loans enable women to increase the employment in their enterprises by 36 percent, versus 26 percent for men, and to hire more women as a result. At the same time, female clients are much more likely to say that they achieved their goals with FINCA. This translates into improved client satisfaction, and tangible improvements in their quality of life.

None of this is particularly surprising—we have long recognized the benefits in promoting women’s financial inclusion. But it’s great to have additional data to back up one of FINCA’s core beliefs: women are not only prudent managers and disciplined borrowers, but women are also loyal customers and the best implementers of our social mission.

FINCA Canada rigorously monitors and researches the impact of its global microfinance work. To view the complete set of social performance indicators and measurements, visit results.finca.org.