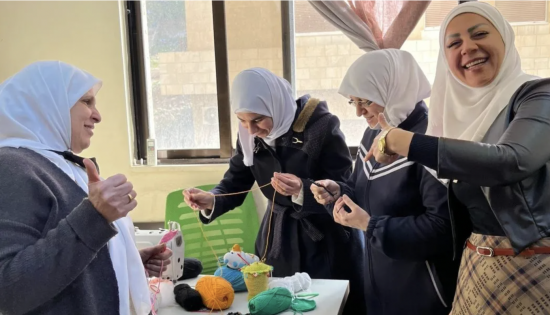 Lara Shaheen is a refugee from the war that has engulfed Syria since 2011. In 2014, she settled in Amman, Jordan.

With no idea when the war would end, and she could return to Syria, Lara decided to build a business in Jordan. She produces handicrafts – soaps, candles and much more – for sale in local markets.

Lara was motivated to be able to take care of herself and her family as well as give back to the country in which she was living. As Lara notes, “We Syrians have many skills. We can use them to support ourselves and support the country we’re in. Instead of becoming a burden, we can be useful.”

The Experience of Refugees in Jordan

More than 1.4 million Syrian refugees – roughly half registered and half unregistered – in Jordan. Most have been in the country as long as Lara. Like people in many other places, they have been displaced by essentially “never-ending” conflicts. In addition to the Syrians, Jordan hosts roughly 150,000 Iraqi refugees and some 2 million Palestinian refugees who arrived (or are descended from people who arrived) in Jordan fifty to seventy years ago.

While some refugees live in camps on the outskirts of Jordan’s cities, most (including 85 percent of the Syrians) live in towns and cities across the Kingdom. Like Lara, their goal is to integrate themselves into Jordanian society.

While they want to build a new life for themselves in Jordan, there is insufficient formal employment to support these displaced people. Like Lara, they have to rely on informal self-employment. Lara has been more successful than most refugee entrepreneurs. She now employs dozens of other Syrian refugee women to produce handicrafts in their own homes.

Despite her success, even for Lara, it is difficult, if not impossible, to access financing to grow a business. FINCA is working to change that.

FINCA staff visiting Amman met with Lara in early 2022. The purpose of the visit was to learn more about the plight of these refugees and to work with the staff of FINCA Jordan to develop a strategy to reach this economically active yet vulnerable population.

Today, FINCA Jordan is preparing to launch a pilot program to lend to refugees. Outreach will begin after the Ramadan holidays end on May 1. FINCA Jordan expects to disburse loans to more than 800 refugees like Lara by year-end.

As Lara – whose story has also been documented by AJ+ – notes, “it is a very difficult decision when you think about leaving everything behind. Your dreams, your friends, your people, your relatives. You basically leave the fruit of 35 years, and you just go.” With hard work and support, entities like FINCA, Lara and other refugees have a chance to succeed.