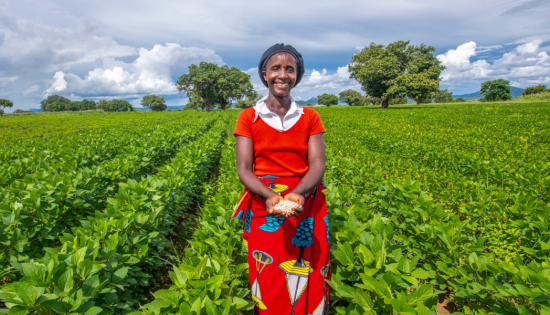 At FINCA, women’s empowerment is at the core of our mission. Everything that we do, from our microfinance offerings to our social enterprise partners, focuses on empowering women. That is why we’ve put together a list of quotes on women’s empowerment from some of the most inspirational women of the last century. We hope that their words empower you the same way they do our mission.

The below quotes come from politicians, writers and activists, bringing to life the difficulties and benefits of empowering women. FINCA has long found women to be the most reliable clients. They are the most willing to spend their hard-earned income on bettering the lives of their children and families, instead of just themselves.

We hope that these quotes and their authors’ amazing journeys inspire you to join the global movement to empower women.

No struggle can ever succeed without women participating side by side with men. There are two powers in the world; one is the sword and the other is the pen. There is a third power stronger than both, that of women.

Malala Yousafzai became a champion for female rights when the Taliban took control of her hometown in Pakistan and banned girls from going to school. She spoke out against the Taliban and was shot in the head on her way home from school. Her story garnered international attention and outrage. After Malala recovered, she started the Malala Fund to advocate for the right of every girl to learn and lead. Malala’s story brought to light the realities that millions of girls around the world face every day. And her work has helped millions more through her mission for gender equality.

The difference between a broken community and a thriving one is the presence of women who are valued.

Michelle Obama made this statement on empowering women at the State Department Women of Courage Awards in 2009. As the first African American First Lady in the US, Michelle faced many obstacles and overcame many challenges in her fight for gender equality. To help other women and girls overcome the challenges they face, she made female empowerment her mission. In 2018, she launched the Girls Opportunity Alliance, which empowers girls around the world through education.

Patsy Mink: First Woman of Color Elected to the U.S. House of Representatives

We have to build things that we want to see accomplished, in life and in our country, based on our own personal experiences to make sure that others do not have to suffer the same discrimination.

As a Japanese American woman growing up in Hawaii during WWII, Patsy Mink faced discrimination throughout her life. She did not, however, let that adversity hold her back and fought for what she believed in. She became the first Japanese American woman to practice law in Hawaii and the first Asian American woman elected to congress. Patsy fought for gender and racial equality, affordable childcare, and bilingual education. She also she was one of the authors and sponsors of Title IX, which prohibits discrimination based on gender. Throughout her life and career, she made the US a more equitable place for women and minorities and inspired millions through her courage and determination.

Quotes on Female Empowerment at FINCA

Drawing inspiration from Malala, Michelle, Patsy and many other quotes on women’s empowerment, FINCA always keeps empowering women at the center of our mission. We understand that when women have access to financial services and life-enhancing goods, the benefits not only flow to the women who receive them but also to their families and communities.

It has been proven time after time that increasing the incomes of poor mothers results in an almost immediate improvement in their children’s diet, and an increased likelihood that they can send their children to school. And when a child is educated, he or she has better opportunities to live outside of poverty.

Empowering women play a critical role in alleviating poverty. In the poorest households, women are often the family’s primary source of income. Yet women consistently lag behind men in access to financial services and other resources like education, land ownership, healthcare, etc. By enabling women to receive access to the same resources as men, women become empowered to take control of their own lives. They can invest in themselves, start businesses, employ others, and in doing so, lift up their entire communities.

Following our long tradition of believing in women as strong business leaders, FINCA also leads by example. In 2016, Andrée Simon became President and CEO of FINCA’s global microfinance operations. And FINCA constantly seeks to identify leadership opportunities for women in countries where women aren’t traditionally empowered, such as Pakistan, Haiti, and the Democratic Republic of the Congo. We are working to change traditional gender norms both within and outside of our organization. In Andrée’s words:

We have to attack cultural norms at the roots. The real impact every single person has in their hands is teaching children and all people around us on why gender equality is really important.