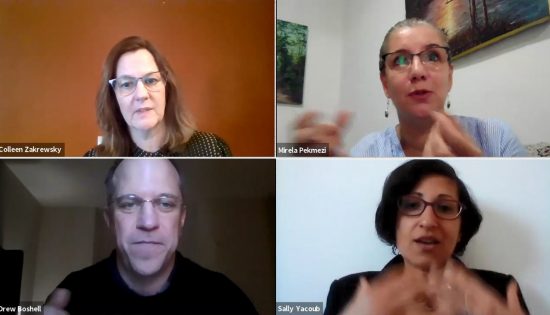 To celebrate International Women’s Day, FINCA pulled a panel of experts together to talk about how investing in women yields dividends. During the 50-minute virtual event, more than sixty FINCA supporters from across the United States and Canada had a chance to hear from and ask questions to our panelists.

At the start of the event, Drew Boshell, the moderator of the panel, announced FINCA Canada’s new campaign to support 120,000 women entrepreneurs in the DR Congo and Haiti from sliding back into poverty. FINCA Canada’s goal is to raise $1.2 million. And for every dollar that FINCA Canada raises, the Government of Canada will provide $4 in matching support.

Drew went on to bring up the topic that was on everyone’s mind, the impact of Covid-19 on women’s empowerment. Drew noted that the pandemic is having a disproportionate impact on women. He quoted a new report from UN Women and the UNDP that by the end of this year 47 million additional women will be living in extreme poverty, less than $1.90 per day.

Mirela Pekmezi, who works for FINCA in the Democratic Republic of Congo (DR Congo) and previously worked for FINCA in Haiti, said that she wasn’t surprised at all by these findings. Women, she noted, have the smallest businesses and the smallest income. “They live on a day to day basis.” When the economy slumped at the start of the pandemic, most of them had nowhere to turn. Women are more likely to lose employment. They have to look after the kids. Making it all the more important that FINCA was investing in women.

One of Mirela’s co-panelist, Colleen Zakrewsky, took the argument even further. Colleen, who leads development and communications at FINCA International, reminded everyone that “women have faced more prejudice in almost every facet of life” for pretty much all of recorded history. “We’re making progress,” Colleen noted, “but we haven’t yet realized full equality.” She went to quote a series of statistics from FINCA’s in-house research on the disproportionate impact of the pandemic on women:

Reflecting on Colleen’s comments, Drew acknowledged that it is terrible that anyone, man, woman or child would have to go hungry or reduce the number of meals consumed, but even worse to see that gender alone is so highly correlated to abject poverty.

Sally Yacoub, a gender equality and inclusion expert, and Mirela then looked at the positives. There are a lot of good things happening too. Mirela noted that, from Haiti to DRC, wherever she goes with her FINCA t-shirt people are happy to see her. “We have helped so many people and they are so grateful.” From training in financial literacy to the loans FINCA makes and its investments in building out a network of agents are seen in hugely positive terms by clients.

And Sally noted that “FINCA is really good at integrating gender into everything. As an employer and as a service provide for the most vulnerable communities.” For example, FINCA’s movement towards credit scoring rather than requiring collateral is helping ensure that women with solid businesses can get loans.

In the DR Congo, Sally and Mirela described how FINCA tailored its products to the needs and realities of women. For example, compared to men, women’s businesses more often are informal. In addition Congolese women typically have little or no collateral and suffer from time poverty (due to their family responsibilities) and often are illiterate.

To combat these inequalities, Mirela was proud to announce that FINCA DR Congo recently introduced a new loan product called Juste Pour Elle (Just for Her). Mirela told the audience that “women receive preferential conditions that make it easier for them to access the loan” and went on to state that the focus was “trying to empower them and not to hand the business to the men.”

And in response to one of the first questions from the audience, Sally reminded participants that women’s financial inclusion is a human right. They have the right to be included. Plus gender equality makes economic sense. Investing in women, Sally concluded, most certainly yields dividends.