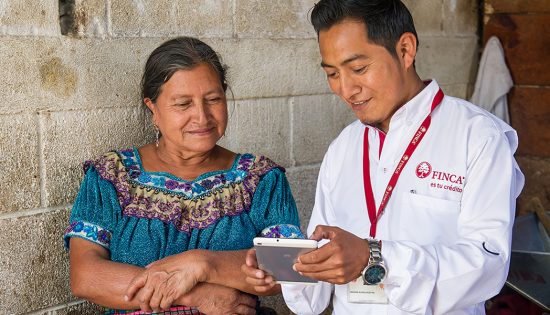 FINCA Guatemala is creatively embracing social technology to better serve and engage its clients. This year, it started conducting virtual meetings for its Village Banking™ clients in Guatemala City using a popular social messaging app. It also launched a new app that mines the power of social connections to expand FINCA’s client base.

Village Banking™ was pioneered by FINCA’s founder, John Hatch, back in the 1980s. A Village Bank is a group of low-income entrepreneurs who come together to share and guarantee one another’s loans. This simple yet powerful idea empowered microentrepreneurs to become engines of development in their communities and has since spread around the world.

While effective in rural communities, Village Banking™ can face challenges in rapidly urbanizing centers, like Guatemala City. FINCA works with low-income clients, many of whom live in zones that are insecure. Village Bank group meetings—critical for client engagement, loan payments and new memberships—have come under pressure as clients worry about their physical safety en route to, and during, gatherings.

In response, FINCA turned to the world’s most popular messaging platform—WhatsApp. Mobile phone penetration rates in Guatemala are among the highest in the world, and FINCA established that most of its urban clients regularly use WhatsApp on their phones to communicate with friends and family. The app presented a perfect opportunity to reinvigorate Village Bank group meetings without requiring clients to leave the comfort and security of their homes.

For the pilot, FINCA Guatemala set up the WhatsApp group meeting space, signed members up, and assigned a loan officer to moderate the group discussions. The team used the experience and feedback from the meeting to script a template for subsequent virtual group discussions, ensuring that they stay on point and are fruitful. To date,  Village Bank meetings conducted via WhatsApp have been successfully rolled out across six FINCA branches around Guatemala City.

At the same time, FINCA Guatemala was internally testing an app, called SoyFINCA, to help clients locate the nearest points of payment and facilitate potential client referrals. Following the app’s public launch in the Summer, clients who download SoyFINCA can now view more than 3,000 GPS-locatable payment outlets, including all FINCA branches across the country. FINCA plans to progressively add new features to the app, such as balance inquiries, credit requests and loan payment due date reminders.

But SoyFINCA is not restricted to FINCA clients; it is free to download for anybody in Guatemala on the Android platform—nearly 90 percent of all mobile phone users in the country. Universal access speaks to the major justification for the app’s development. Recognizing that client referrals were more effective for new client acquisitions than other channels, FINCA Guatemala designed the app precisely to facilitate those interactions. As extra motivation, SoyFINCA users earn commissions for successfully referring new clients. In the first 90 days, the app has been downloaded more than 1,000 times.