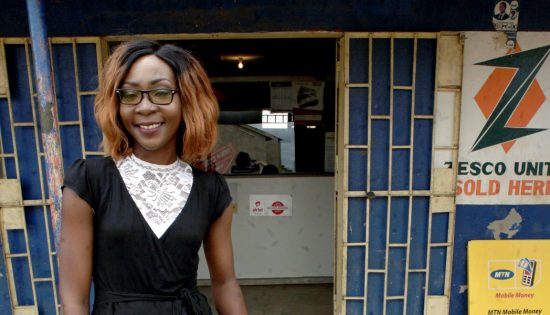 Suwilanji Moomba is not like most youth in Zambia — she has a job. Most of her peers, however, struggle to find decent and steady work. Some are unemployed and others resort to working in short-term, odd jobs. In fact, the International Labour Office (ILO) estimates that youth are three times as more likely to be unemployed than adults and are often exposed to lower quality of jobs despite achieving a higher education.

“We have so many graduates looking for jobs and there is too much competition,” the twenty-six-year-old says.

For Suwilanji, entrepreneurship was her savior. After finishing her university education, she struggled to find a steady position. She noticed that there were no banking agents or bank branches near her uncle’s house and he had to travel far just to deposit money. That’s when the entrepreneur spark lit for Suwilanji and she decided to open her own money transaction shop. Today, she runs several of these shops around Lusaka.

“I do think of myself as an entrepreneur,” she exclaims.

Entrepreneurship is a good option for young people. Being an entrepreneur myself, I have no limits as I’m able to explore new things every day.

Can Suwilanji’s success as an entrepreneur serve as a model to help solve the youth unemployment problem?

Youth unemployment is large and growing. An estimated 475 million new jobs need to be created over the next ten years to fulfill the growing numbers of youth looking for steady work. In Africa alone, over 600 million people are under the age of 25 and 72% of them are unemployed or underemployed.

The international community is hoping to tackle these alarming numbers by focusing on building the appropriate skills for youth to obtain jobs. The United Nations established World Youth Skills Day to shed light on this issue and to foster viable work opportunities for youth around the world. By 2030, the United Nations is hoping to reverse youth unemployment as stated in Sustainable Development Goal (SDG) 8.

How FINCA is Creating Young Entrepreneurs

FINCA is tackling the problem by investing in alternative delivery channels, like agency banking, to help the unemployed build businesses and create jobs. A banking agent is a shopkeeper or merchant who is contracted by FINCA to process clients’ transactions where FINCA doesn’t have a brick-and-mortar presence. The agents are equipped with POS machines, a portable device that connects to bank accounts through biometric fingerprints.

FINCA has really helped with my financial skills. I studied PR and I didn’t have an interest in accounting or bookkeeping. But with money transaction services and as a FINCA banking agent, you deal with money every day. My financial skills have really improved.

Ruth Simwanza Mulenga, Chief Commercial Officer of FINCA Zambia, adds, “FINCA services give these youths an opportunity to be able to engage with their community. We train them in financial literacy and financial skills.”

With the commissions earned as a FINCA banking agent, Suwilanji has not only been able to support herself but to also invest in other business opportunities. She currently facilitates customer service training for other small business owners.

Suwilanji is helping her young peers to find jobs too. She employs seven people, all in their twenties.