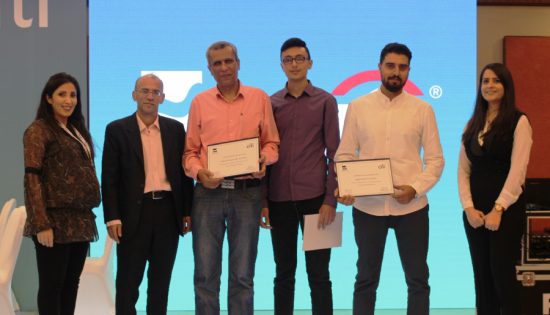 Over the past twelve years, FINCA clients from around the world have been given this award. On March 27, twenty Jordanian micro-entrepreneurs were honored, three of whom are FINCA clients.

Wael is forty-five years old and married with two children. He used to rent a small space on the street to sell children’s clothing to help pay for his studies. After years of hard work, Wael had earned enough to purchase the shop right next to his road-side stand. The vision in his eyes, however, began to erode and soon he was completely blind. Undeterred, Wael took a loan from FINCA to expand his product lines and grow his shop. Today, he has two employees and is proud to have put his son through university studies.

Shaaban grew up with farming in his blood. The family owned a farm in Karama, which inspired him to pursue agricultural studies at university. In 2014, Shaaban took out of piece land and planted organic fruits and vegetables. He brought his products to the market via on-demand, online ordering. With such an innovative business model, the number of customers quickly grew. Shaaban opened a shop, called We Farm, so that customers could experience his organic produce firsthand. In 2015, he received a loan from FINCA to introduce a new line of sugar-free products. Shaaban employs six people and has used his profits to pay his brother’s school fees.

Entrepreneurs see opportunity where others find the ordinary. Issa is no exception. In 2014, Issa received a FINCA loan to start a new tourism project. The area of Deir Allah boasts a temperate climate and beautiful views of the Jordan Valley and parts of Palestine. Seeing the potential, Issa opened the first tourist restaurant, called Sunset Café, in the area. This project has created jobs for five people. Issa hopes to inspire his fellow Jordanians to develop the local tourism industry and grow the economy.