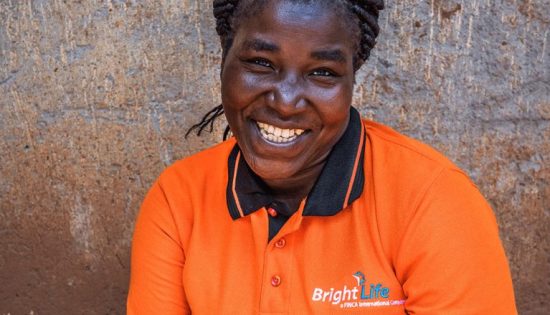 Judith Ocendi lives with her husband, Samuel, a home builder, and their two children, ages 5 and 16, in Uganda.

Two years ago, Judith was looking for work when she met Joseph, a FINCA Uganda employee. Joseph told Judith about BrightLife, a FINCA initiative that brings clean energy products to poor and off-grid families. Judith was already familiar with FINCA’s microfinance services. In fact, many of the women in her community were members of Village Banking™ groups.

With the backing of a trusted name like FINCA, BrightLife caught Judith’s attention. Even better, it would allow her to make an impact doing something she was experienced in: selling solar energy products. So, Judith applied to become a senior sales agent for BrightLife.

I really enjoy working with the grassroots, local people—those with varying socioeconomic status. I like being able to change peoples’ lives and perceptions about what is possible.

In just one year with BrightLife, Judith has seen the special bond FINCA creates with its customers.

“One man told me he really likes the way FINCA follows up with its clients—always checking-in to see how they are doing and to introduce new products and services that benefit their lives,” recounted Judith.

He said he likes how FINCA remembers each and every client.

After demonstrating strong commitment and results, Judith was promoted to a sales supervisor. Her leadership will be a great asset as BrightLife looks to grow and bring clean energy to more Ugandans.